You are here:
Success stories 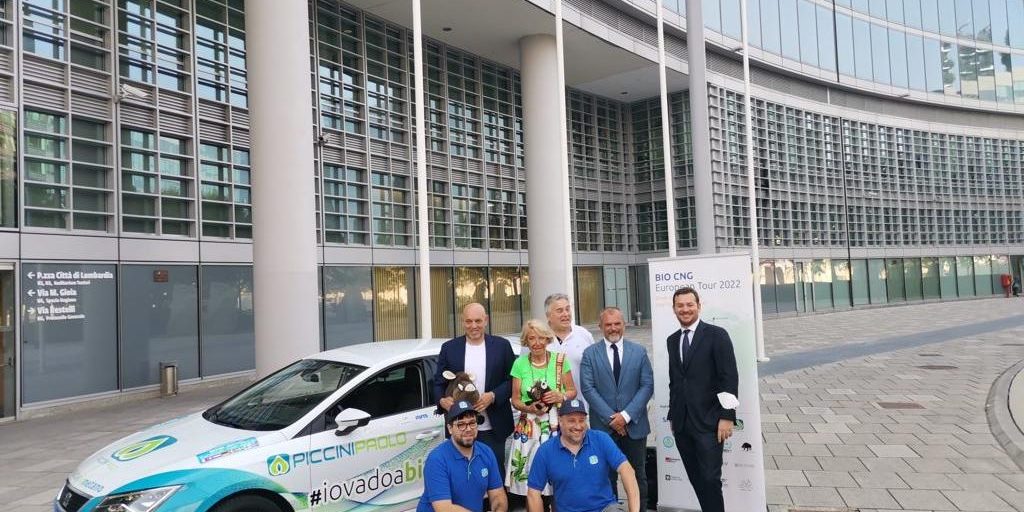 The European Tour that will cover several countries with a car powered entirely by biomethane to finally reach the Arctic Circle kicked off in Italy. The CNG Seat Leon, driven by the traveler and journalist Guido Guerrini, left on July 20 from a Piccini Paolo Spa service station in Sansepolcro, a municipality in the Tuscany region, while the official start took place on July 21 in Milan with the presence of authorities and representatives of the companies and organizations that are part of the project, as well as numerous media.

The journey is promoted and has the support of the Associazione Culturale Torino-Pechino (Torpec 2008), Piccini Paolo Spa, Snam4Mobility, the Lombardy Region, the World Gas Mobility Council (WGMC), NGV Italy, the Italian Biogas Consortium, Assogasmetano and the Eco Futuro Festival.

In these difficult times for the natural gas sector, both due to the current international crisis and the market turbulence that began last year, many countries, including Italy, have brought the production of biomethane, the gas produced by processing food scraps and animal waste, back into the spotlight.

Guerrini’s commitment is precisely to be able to demonstrate what can be achieved using the biomethane available at numerous Italian and European service stations: reaching the Arctic Circle, exactly the Finnish city of Rovaniemi (known for being the official home town of Santa Claus), using only non-fossil gas. Indeed, the countries of northern Europe are the most virtuous in the production of biomethane, followed by Germany and Italy. The itinerary is about 10,000 kilometers and will cover nine European countries.

This ecological adventure also aims to compare the price of biomethane with that of gasoline and diesel to show that, despite the significant increases in the last months, natural gas is still the cheapest fuel and, of course, the most environmentally friendly, in addition to promoting the circular economy. Guerrini is accompanied for most of the trip by Vespa writer Fabio Cofferati.

During the launch, the president of WGMC and NGV Italy, Mariarosa Baroni, expressed her support for Guerrini’s journey and highlighted that biomethane is the only practical, sustainable and currently available solution for an ecological transition. “Truck and car fleet operators are increasingly concerned about transportation costs and cannot afford to switch to hydrogen or electricity. Biomethane, meanwhile, has a ready-to-use and available infrastructure, unlike electricity. All natural gas stations in Italy will be able to offer biomethane, either in the form of bio-LNG or bio-CNG,” she explained.

In addition to Italy, the Bio-CNG European Tour has already passed through Switzerland, Germany, Denmark and Sweden. The trip is expected to end next week. To follow the route, you can visit Torpec’s Facebook and Guerrini’s Instagram.

The Bio-CNG European Tour arrives in the North Cape
August 3, 2022